It Takes a Village

I have been remiss on sharing how well our big set-up, back on November 18th, went and I am pleased to say it progressed extraordinarily well because of the amazing response from our terrific volunteers.  Just a couple of days past Veteran's Day, I know we all really wanted to help this Vet and his large family...Mom, Dad, three boys (aged 19,13 and 12) and three girls (aged 17, 15 and 9) and help we did.  We were able to turn this four-bedroom, two-bath unit into a really welcoming home for this family who have gone through so very much.

After my email went out, Paula Fagan wrote back within minutes it seemed, saying she was on her way to the Valley and would pick up a broom, dustpan, large kitchen trashcan, juice boxes and granola. She also said she could help with the set-up if we were short on volunteers but that she was setting up an art show...we were able to let her off the hook since so many of you came forward to help.

Then Wendy Skolfield dropped me an email, a couple of minutes after Paula, saying she too would pick up a broom, dustpan, trashcan, mini broom and dustpan, kitchen gloves and 2014 calendars, most of which are being used in tomorrow's set-up.

Deborah Kashinsky, Paula Dove and Allyn Katleman volunteered to help but we let them off the hook cos there were so many of us.

Lizzie Kipner and Randi Gottlieb did a terrific job (wait til you see the pictures below) of coordinating the perishable food for this family and Lizzie's good friend, Pat Farrar, also contributed MANY bags full.  Paulette also contributed so the kitchen was full to bursting but with six children, I am sure it will all be eaten.

Joining Karen and me at the set-up were Mary Morley, Sue Forbes, Lizzie Kipner and Randi Gottlieb stopped by (she was working) and put in an hour of effort as well.  While it was a lot of work (and a pretty warm day), the apartment looked really warm and welcoming when we finished and we were told by the staff coordinator for new tenants that the family was overwhelmed with gratitude and appreciation for all we did.

Photo Evidence below! Karen took the pictures, sent them to me and while I know there were more than this, I cannot find them. 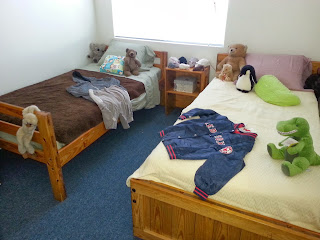 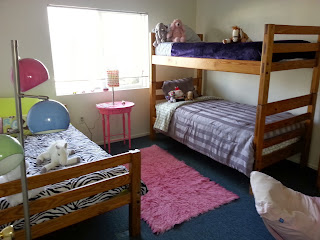 The bedroom shared by the three girls.  The darling pink furniture, chair, rug, table and lamp were all donated by a friend of Karen's.  This room was so sweet and didn't feel at all crowded. 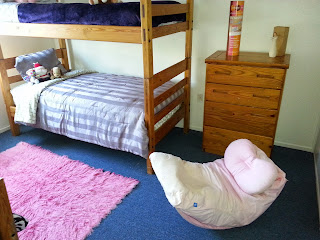 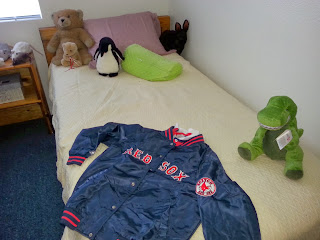 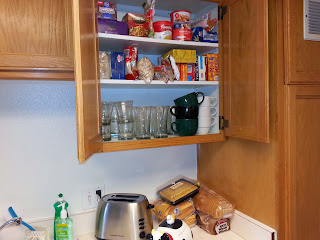 We were running out of space for all the food! 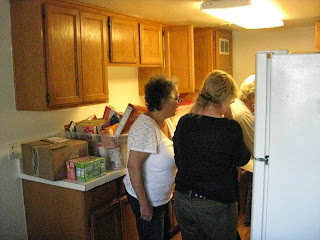 Such a small kitchen and so much to put away! 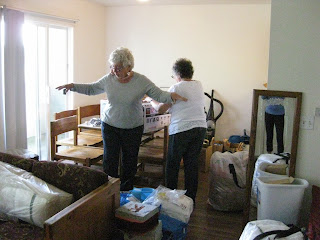 Mary giving some suggestions of just where everything should go! 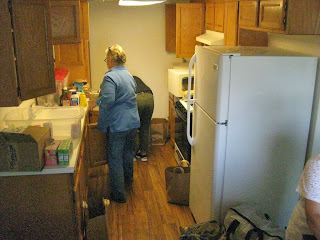 Trying to figure it all out!